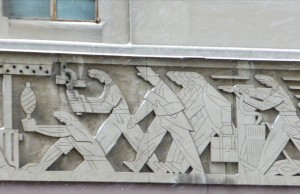 The routine for business trips with my dearest is during the day he goes off to do whatever it is he does and I wander the streets without a chaperone. In Toronto this means navigating through the heart of Bay street on the way to the real world. Tailored suits, really shiny shoes and an atmosphere thick with excitement, expensive cologne and entitlement. Great herds of people walk with great purpose from here to there and back again. They race for the train or stride to the local coffee place to be seen at an atrium table with a laptop, a vente blonde and a coffee. 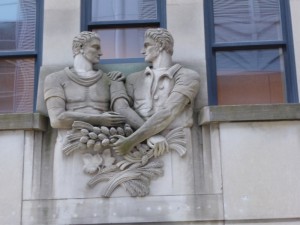 There are wonderful buildings in Toronto with all the embellishments big stone structures seem to have hanging on them for whimsy or to reinforce their weighty significance.  I walk around with my wee but mighty point ’n shoot always at the ready, stalking these impressive monuments to industry and the titans thereof.

Leaning or sitting up against a lot of these buildings, for shelter from the wind, rain, snow and always asking for spare change are the nameless, the homeless. Every city has them, the ones we define by what they don’t have.

I learned a long time ago it isn’t always a matter of tossing money their way. I do give them spare change if I have it and I don’t care what they spend it on, really. If I lived on the street, I’d be as anesthetized to the situation as possible 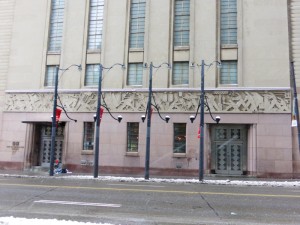 even if that’s what put me there in the first place. No, it’s more a matter of acknowledging them as being people. Just to say ‘hello and sorry, not today’, can make a big difference.

This day I had a visit to the Art Gallery of Ontario on the agenda. I was going to meet up with a very good friend and wander through the exhibit of the early post-impressionists. My kinda day and, oddly enough, hers too. Serendipity strikes again. On the corner was another homeless fellow and his dog. So I walked past a bit, turned around and decided to take his picture.

Now, normally I don’t believe in paying people for appearing in my holiday pics but this seemed like a way to acknowledge his basic human dignity. Airy fairy, I know but it was a sunny day. So I walked back, gave him a few dollars and explained I’d taken his picture. If there was any problem, I assured him, just say so and I’ll delete it.

We chatted. Well, mostly I listened. 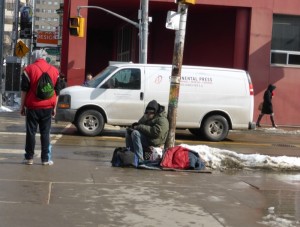 The dog’s name is Samantha, she used to belong to his friend but ‘buddy got into a fight and was stupid and, even though he’s a big guy, eh, just had to use a knife’. By now Samantha is almost in my lap because I was down on one knee talking to the fellow. Next week’s his birthday, 64 years old and the dog is why: she saved his life because he has to take care of her. Walk her, make sure she eats, pick up her poop, and get all her shots. Someone complained, thought she was one of them vicious type dogs so they sent a vet by to check her out. Well, didn’t he play with her for almost half an hour, said she’s just fine and take her to him anytime, no charge. 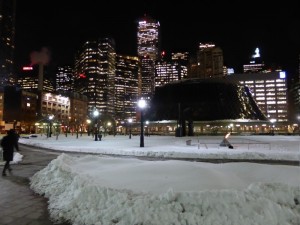 They sleep rough most nights but there are a couple of places that let them both in. And there’s a couple of people working on finding him a place to live but he doesn’t like those small rooms, eh. Not enough space for Sam.  I still don’t know his name because he was all about Sam.

We assume street people don’t live long and they have all kinds of weaknesses we have risen above: addiction, emotional instability, bad luck. It is easy to dismiss them as part of modern life. It is easy to say, ‘there but for the grace of God go I’, like we’ve got it and they don’t. Well, I’m pretty sure the name is different in each city but in Toronto God’s grace is named Samantha, wears a pink jacket and she’s probably sleeping rough tonight. 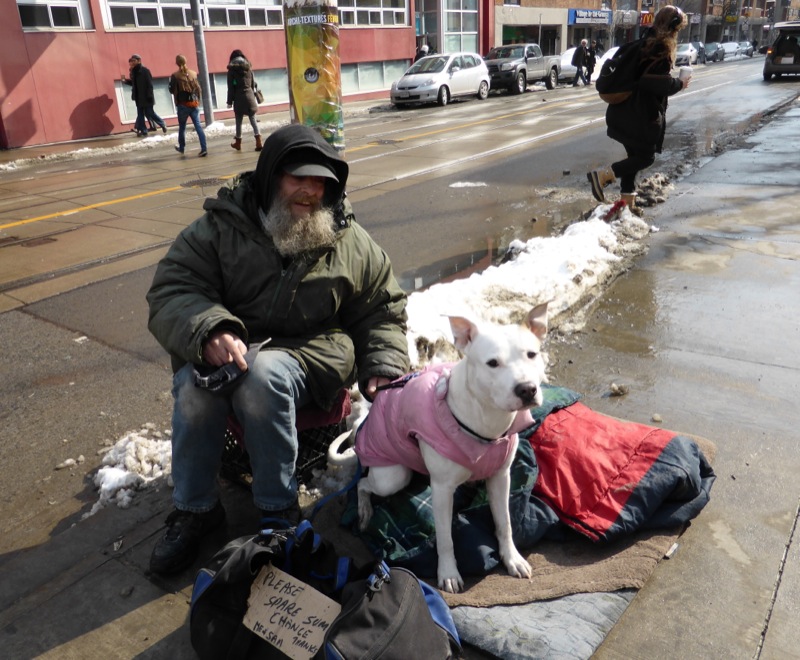