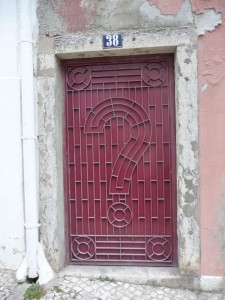 From May 12 to June  7  Mark and I went on a trip from Edinburgh to Lisbon via Amsterdam. It really was more of a grand tour in the 19th century sense of the phrase except we didn’t ‘do’ Italy. Mostly because we’ve been there already.

Considering we were only gone 4 weeks, I’m pretty sure you’ll agree with the majority of folks that we managed to cover a large amount of ground within that time. As I have told those folk who questioned our itinerary, my beloved is descended from the Tartars and the Goths (the real ones, as in sacked Rome Goths, not the emo-teens as in Twilight). He has a genetic imperative to cut a swath through Europe every so often, invade, pillage and move on to the next village with whatever his horse can carry.

To aid in your visualization of this trip I have, at great cost and no small expenditure of skill, provided 2 maps. 1 is the United Kingdom and the 2nd is of the remainder of Western Europe.

Along with the maps are the various accommodations in each location and links, if possible, to them. 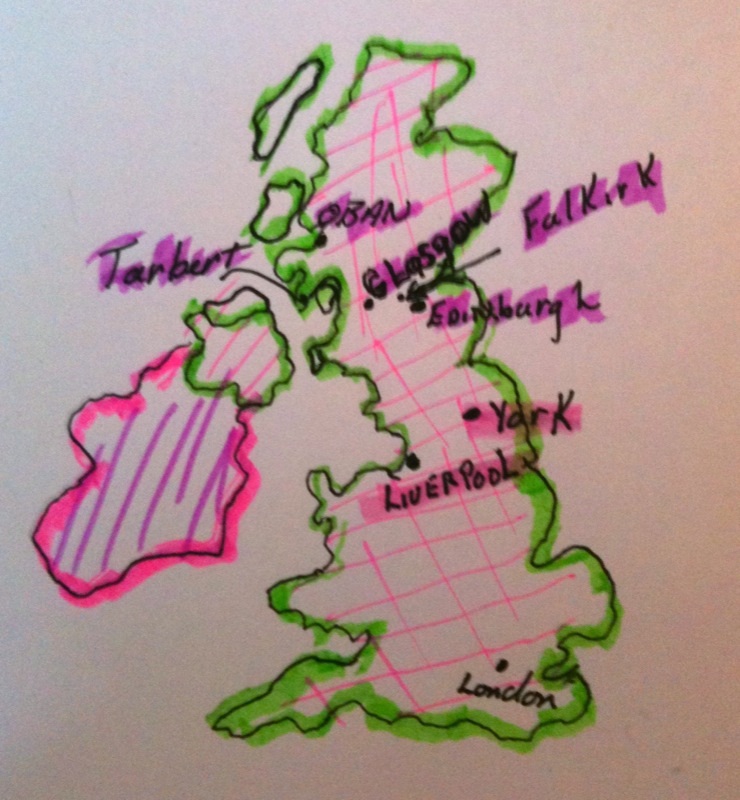 Priestville Guest House  Easy to find, walking distance to town and a block from the bus stop for those not up to a wee hike before hiking all over town.

Oban is a popular place to visit. It is in a gorgeous setting and close to one of the more spectacular areas in the Highlands, Glen Coe. We drove from Edinburgh to Oban through the Glen Coe area. It took a bit longer but was well worth it. Be prepared for very narrow, winding roads and plan on stopping frequently. There is too much to see here to rush through it.

The Glenrigh is a lovely, 5 star Guest House – it is expensive compared to most of the places we stay but worth it. If you are interested in accommodation that is a little less dear, Rick Steves has some recommendations that are excellent too.

Oban itself is not typical of a Highland fishing town, the bait and nets are set for tourists.

Marviesta This is what is called a self-catering accommodation, in other words it falls more into the apartment rental category than B&B or hotel. Linens are provided but you are basically renting the flat. For me, this was a visit to a friend so it was not under the usual circumstances but I can say it is a fabulous location and what a real Highland fishing village is all about.

Given the choice between Oban and Tarbert, I’d definitely choose the West Highlands and this town. And I’m not just plugging it for my friend. There are many small hotels and private accommodations here. It is off the beaten track but still less than 2 hours to Glasgow.

Babbity Bowster – a CAMRA approved pub in the heart of Glasgow. It’s 3 blocks off George Square, which meant nothing to me at the time but now I see it is a pretty sweet location. It does take 10 minutes to walk to the train station but it’s through downtown Glasgow so what’s to complain about.

There’s an app for that, the CAMRA UK Good Beer Guide App. It costs 5 pounds but, if you’re trekking around the UK or even just visiting for a few days, if it saves you from 1 dismal Big Vat lager, it’s worth it.

From Glasgow we took the train to Liverpool and stayed for 3 days with my cousin-in-law and her cousins. All a long, involved story but, suffice it to say, they were brilliant. We were well taken care of and even had a place to do laundry that didn’t involve towel racks, shower taps and damp bathroom floors.

It is a beautiful city and under visited except for folk going to see Beatles sites. Yes, we went to Penny Lane too BUT our friend actually spent a few years of her childhood a block off ‘the lane’ And we got the real story on it all.

Nope, sworn to secrecy. Think Masons in red shorts. If you’ve ever seen a crowd at a Liverpool vs Man U match, you’ll know why I can never reveal these secrets.

On the recommendation of friends who have been there many times, we booked into the Elliots Hotel which is actually a B&B. When you go to the website, that first room with the big bed in an alcove…that was our room. Seriously. It was more like a suite.

York is old. Like way old. Like you can’t spit in any direction without hitting something 500 years old or older. And if you know how well I spit (they call me ‘dribbles’ if that’s a clue), that’s saying something.  There are places that are a bit twee but, overall, it is a pretty amazing place.

And it has gone on our list of places we’d see again and schedule a bit more time.

This is not a place to economize. The most basic of accommodation will run you an average of $120 per night. It is possible to get a decent place for a relatively reasonable price by going outside the central London area. Next time, however, I’ll do a bit more research before booking and I’ll start a lot sooner.

We stayed at a B&B in Hampstead, Dillons Hotel which did not quite live up to it’s billing. The room was adequate but the breakfast was basic toast, cereal and yogurt buffet. Considering this was probably one of the more expensive places we stayed on the trip, it was not one I’d mark down for a return visit.

The hotel, that is.

London, I’d go back to in a heartbeat but will look for accommodation in the British Museum area and much closer to a tube stop. We really spent from morning till late night walking about London because it wasn’t possible to return to the room for a bit of a snooze. The clothes we wore out at 9:00 a.m. and tramped over several miles of merry old tarmac were the same clothes we wore to the theatre that night. Our tickets were hardly dress circle but still, it would have been nice to put on a clean blouse and pants or skirt.

Then through the Chunnel and over to the continent. 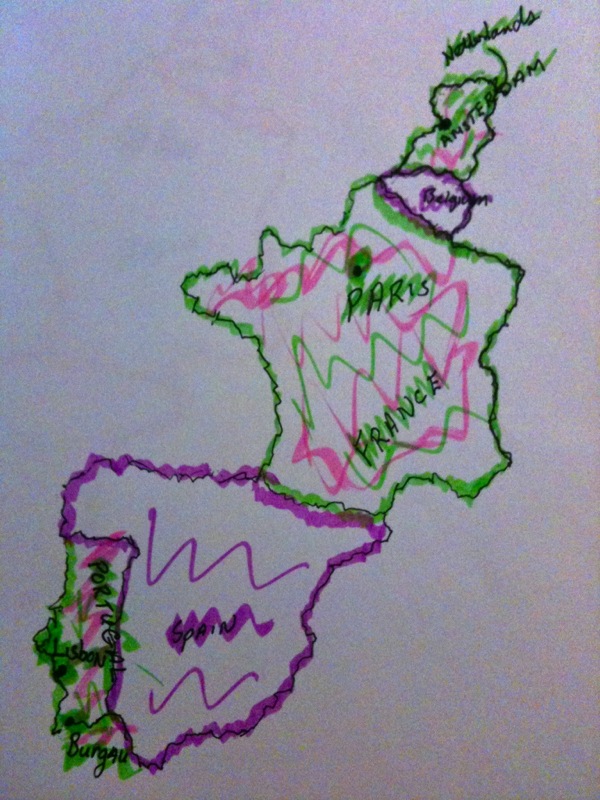 Again we had friends to visit but we stayed our brief 2 nights at the Hotel Keizershof in the heart of the city. Close to the flower market, Dam square and the Van Gogh museum, this was another family run hotel but the owners were actually friendly. The breakfast room was part of the kitchen and sitting room area. Despite the narrow stairs and having to go 3 floors up to the room, I would consider staying here again just because of the family.

Amsterdam is another city made for foot travel. If you’re not feeling up to walking, there are trams that will take you anywhere in the core area for a reasonable fair. For the most part people are friendly and, no matter where you go, who you talk to, they all speak English as easily as they speak Dutch. It truly is a bilingual country. And there doesn’t seem to be any resentment at all in having to switch languages. Partly because they know how difficult their language is and partly because we’re Canadian. Seriously. It is still a good thing to be Canadian in the Netherlands.

Ahhhhh, my favorite city. We stayed at a little tourist hotel, 2 star but with an elevator and very nice room just off Rue Cler. This is a lovely little area near the Eiffel tower and over-run with Rick Steves devotees. Which is how we found out about it, so, I guess, I shouldn’t complain. Cheese and ham crepes at the Olympia restaurant…or capping off the night with a take away cinnamon & sugar crepe walking by the Olympia just before it closes for the evening.

The Hotel Turenne is a definite recommendation except for one little problem. The wifi is the pits but that is a common complaint throughout Europe. All in all, just go down to the breakfast room/lounge and sit down with computer/Ipad or Ipod and do whatever you need done there. Besides, what are you doing in Paris with your nose in a computer? Get out, walk along the Seine, go for a Sandwich Greek in the Latin Quarter, get humbled by Notre Dame Cathedral or simply sit in the gardens behind it watching the children play.

It really is the most beautiful city in the world…that I’ve seen…so far.

You probably have never heard of this place – even if you’ve been to the Algarve in Portugal, it’s doubtful you know about Burgau unless you’ve actually stayed here. Rick Steves recommends going just over the hill a little further west to Salema but, y’know, I think this place was a little less occuppied, even at this time of year when the season is only just starting.

Yes, there are a lot of Brits in the Algarve and if you stick to Faro or Luz you will see miles of yellow and white stucco condo developments. In Burgau it’s just starting but the village is still pretty much intact and fun to walk through. The condos are just starting to go up here and the daily rental for these is an amazing deal. One thing regarding the beach: the water is cold. It looks gorgeous and Mediterranean but it is definitely the Atlantic. The pool, however, warms up as the summer gets underway or so I was told.

It is definitely worth a visit and staying for a few days to explore. We found a nice little tourist hotel, breakfast included and, once again, no elevator. What is it with Europe? So advanced in many ways but elevators and wifi still not really on the radar. Oh well, those are definitely first world complaints so I’ll get on with it.

The Residencial Roma is in a great location; has big, basic rooms plus a pretty great breakfast spread.  The other place I wanted to get – I find booking places means applying a formula of (recommendations from Trip Advisor plus Rick Steves plus location) times ammenities over rates plus breakfast – was Residencial Florescente. The only reason we went for Roma was the parking was included.

Yes, there was a car. The people we met up with in Burgau had driven from Italy to the Algarve and it was a good way to get around the area. We drove a lot in the Algarve but not much in Lisbon. However, a car needs a place to live and it’s better if that place doesn’t add the charge to the final bill.

Then a brief stop in Ottawa for the last annual propeller head Conference – PAB 2012 and we finally reached home again on June 11.

That’s it for now. I will add pictures to this page when they all get downloaded – did I mention there were 2,200 or so pics? And I’d say, conservatively 2,000 are ones I took. Mark will say I’ve underestimated drastically. 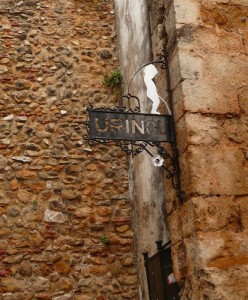