My 3rd rule of travel: you only regret the pictures you didn’t take. 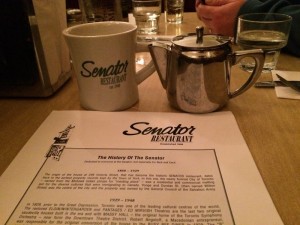 Our second night in the Big Smoke we found our way to a cafe featured on one of those ’Good, Greasy and Enormous Portions’ food shows. Given the cold weather and our love of comfort, we decided it was time to see if this PATH thing could get us back to the hotel in warmth and relative safety.

We realized we were lost after walking back past the same Second Cup–Shoppers–Gluten-free Florist stores for the 3rd time. Fortunately a kindly stranger emerged from the pack and offered guide services as he was going in the same direction. As we passed through a massive food court pod I was distracted by a wide set of stairs leading to a large atrium. The ceiling was several stories high, glass and supported by an intricate barrel vault of white girders. Against the black winter night sky, thes 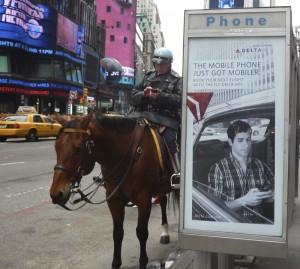 e girders were floodlit a delicate mauve. And it was just there. No signs, nothing in the tourist books, never mentioned in the ‘if you go you must…’. Just a simple case of ‘if you turned your head the wrong way you’d never know it was there’   understated magic that happens on every trip.

Given the choice between framing a couple of not very good shots on my phone or seeing my home, children and indifferent cat again, I immediately did the kid sister ‘hey wait up, guys’  and ran back down the stairs in search of my urban convoy. After all, I could come back the next day with my camera and take much better pictures, right?

The next day was my exploration day. With camera in hand and a roughly sketched plan of getting lost in the general direction of where I’d been the night before, I set off to see what I could see. 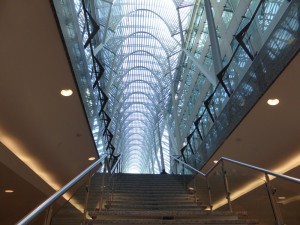 I found my magic atrium but, of course, in the bright light of day it was much different. It was still an impressive piece of design and the space had the hushed weight of a cathedral despite the number of people now scrabbling along on the marble floors.   Not quite the magic of being alone with the great spirit of the space but still hold-your-breath impressive.

Further down the way I noticed a stairway off to the side. Most walls and floors of PATH are finished in modern, shiny, high gloss, low maintenance either stainless or acrylic or marble-ish reflective surfaces. The kind designed to repel dust and any trace of life. But 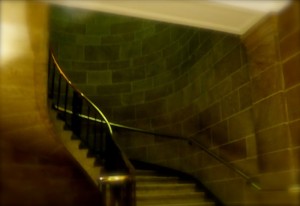 here, off to the side was rough stone and a spiral staircase. I had a flash back to the unassuming stone staircase up to Sainte Chapelle in Paris. Of course there could be no such similar surprise here but still…I quickly took a picture and thought about where to go next.

I felt a light hand on my shoulder,  “Excuse me, are you taking a picture of the staircase?”

I nodded, expecting to be mildly ridiculed as a rube and asked if I woul 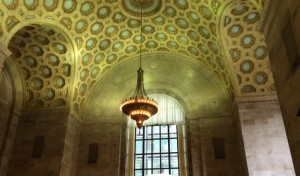 d be interested in some magic beans to take back to the family in Petticoat Junction.

The woman smiled and said, “You have to go upstairs. It’s the old CIBC bank but it has beautiful high vaulted ceilings, ornate chandeliers and…oh, you just have to go.”

We chattered for a few minutes about some of the other spaces along this walkway and then, just as quickly, she disappeared back into the endless flow of people. 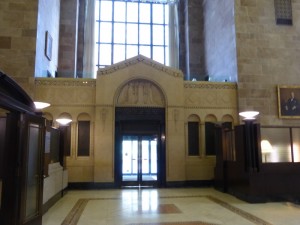 She was right, it was impressive: a cathedral to the money that built the country. Stone walls, gilt ceilings, brass doors and icons of presidents past surveying the minionage from on high. The only things missing were Dan Brown, candles and kneelers. Perhaps the latter were in the offices discreetly panelled off from the uninitiated. It even had a rood screen-like monument to employees who did not return from the Great War.

There was a fitness to this, a combination of the sacred and profane and in the courtyard a 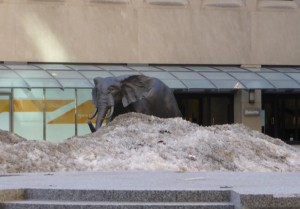 So, you can go back later to take that picture but time is a river: you may step in the exact same place but it isn’t the same at all. I should say it’s never a loss to go back, after all there are always new things to see in even the most familiar places. I just think it’s always a good idea, when it looks like it would make a great picture, to take it. 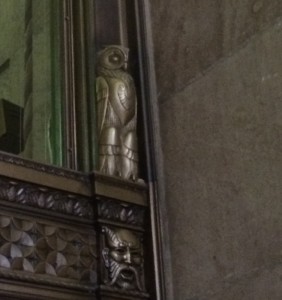 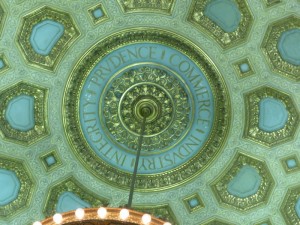 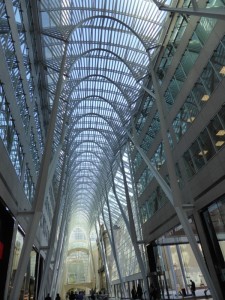 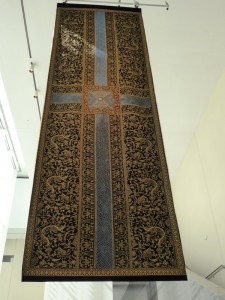 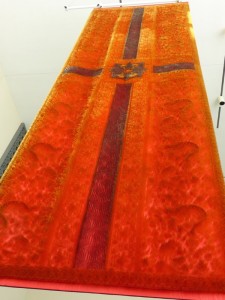