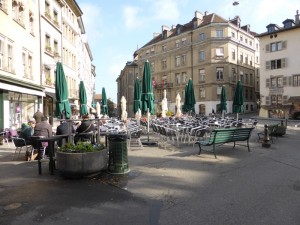 Geneva is a lovely city. Absurdly expensive and with regimented flourishes like a german-engineered Paris but gorgeous. From neo-classical apartments to streets that fan out in a carefully measured attempt at whimsy, Geneva is a startling blend of the cultures. This is in the french speaking division of Switzerland and most citizens adopt the Gallic posture of  ‘balais dans le cul’ in the face of annoying tourists.

That’s unfair. I only met a few Genevans (Genevois? Genevanians?) clenching a sizeable balais up their proverbials.  Even those folk tended to soften up once they realized this eedeeot was an apologetic Canuck looking for the Jet d’eau. Which was inexplicably shut off during most of the days I wandered in the general vicinity.

“I do not know, madam, why it is not jetting at present. It should be where you point but today it is not. Please, you would like a lemon tart with your cafe renversé?”

It is a perfectly safe city to wander around in. Seriously safe. At one point I turned a corner and noticed 5 ladies all dressed fairly lightly for the crisp autumn weather. They all had very high heels and very short skirts and were evenly spaced along the wall of a very large parkade. Across the street, in the alcove entrance to a small hotel another 3 ladies were sitting on bar stools…nope, no restaurant or bar, just 3 ladies on bar stools in front of the hotel entrance… So, drive in service on the west side and slightly more upscale hourly room rentals on the 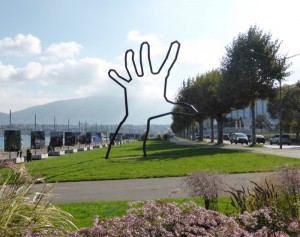 Here’s the Geneva part: at no time did I feel at risk. Moderately uncomfortable perhaps and mildly disappointed when not a single car driving past even so much as slowed down, let alone attempted to proposition me. But in danger or frightened for my life? Nope.

It is an old city but does not feel like it. It was a village when Julius Cesar was on his first Vidi Vici world tour.  Most of what Julie would have seen when he breezed through is well and truly 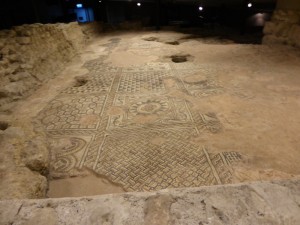 buried under the cobble stone streets of old town. You can find some of it under St. Pierre Cathedral where Reformation party animal John Calvin did a few reno’s, taking it back to the studs and leaving it like that.

There are many surprises to stumble upon, disarming mostly because they do not seem planned. Some are delightful even if they were planned and others, like the absolutely marvellous Manor Department Store, are so well planned that everything the bumbling tourist might need, including muffins, pizza slice, enormous custom made sandwiches and a juice (it was a taxing morning, after all and I needed to refuel for the afternoon) are spread before your wondering eyes. 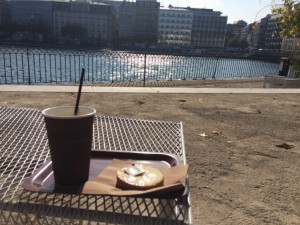 Geneva. There is crazy traffic on the main bridge, Pont de Mont Blanc, the hustle of business, hotels and crowds on the banks nearby and 3 more bridges below with foot traffic, buses and a parade of limousines. On the Il Rousseau, however, there are trees, benches, a kiosk-sized café and quiet. Not many people come here so you will share this space with the barista, maybe an office worker on an early coffee break and J.J. Rousseau photobombing everyone’s selfies.

It is a beautiful city, well planned and efficient. My take away from a week there is it everything you would expect from the Swiss, including all things cheese and all things fondue. In retrospect, a little more fruit would have been helpful. 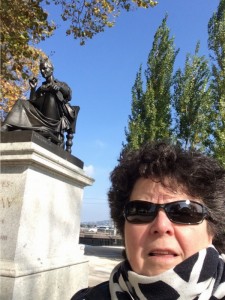 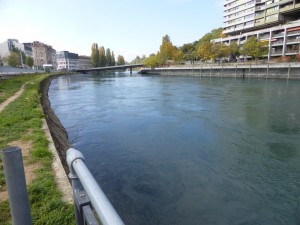 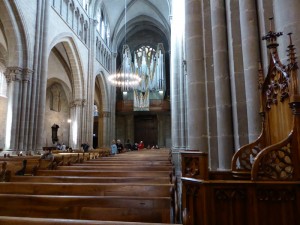