From time to time I come across a building or a place that just screams “Da Vinci IV, the mystery of the flaking fresco”. These are overlooked settings for the long sagas Mr. Brown concocts: tales of conspiracy and Knights Templar and the far reaching tentacles of the ….er, I mean, the Vatican.

All to be solved by Tom Hanks within a 24 hour period that occasionally defies logic and, more frequently, the laws of physics.

In the tiny but once mighty town of Sintra, just outside of Lisbon I felt that familiar ‘wait till Danny boy finds this’ frisson. In case you don’t know, as I didn’t until arriving here, this wee town probably has more castles per square mile than just about anywhere outside of Crazy Ludwig’s backyard.

Quinta Da Regaleira is the one, if you have only have time for one, to see. A bit 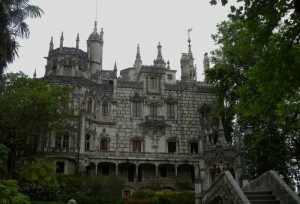 of a climb from the town centre, the relatively small castle and grounds are lousy with atmosphere. And tradition, and history. A moment, preserved in marble, of Portugal’s declining fortunes as a colonial power.

Originally the property was owned by a family made wealthy exporting Porto’s most famous product. It was than purchased by an even wealthier Brazilian returning to the land of his parents.  Antonio Carvalho was born in the new world where he increased his family’s fortune many times over through the sale of coffee and gems.

Antonio employed an italian architect, Luigi Manini, to build his palace, the chapel and to help with the design of the 4 hectare landscaping project.  It is a song of Neo-Manueline architecture, opulence and a

healthy dollop of whimsy.  Marble carved into intricate knots of rope, a library floor that appears to float in a tower of books and for the more contemporary visitor’s amusement, magnificent knockers.

What makes it suitable as a setting for a climactic chase at the end of the interminable day each of DB’s novels cover, are the grounds surrounding the palace. The Terrace of Celestial Worlds, Initiation Well, the Grotto of the

Virgin. Alchemist and Masonic symbols run riot through the place. There are tunnels, towers, caves and springs. Places to fall off of and into and a spiral staircase carved down through the rock.

Oh yes, this is the stuff dreams are made of, my lad.

I suggest you get there before it becomes over-run with the tour operators  currently picking the pockets of the gullible in Paris, London and Rome. The herds can be seen following umbrellas through the corridors of the Louvre and the Vatican Museum seeking out one or two paintings that prove the dross of fiction. While ignoring the treasures that surround them.

Quinta da Regaleira is a playground for your imagination. Put the book down, roam the grounds and find 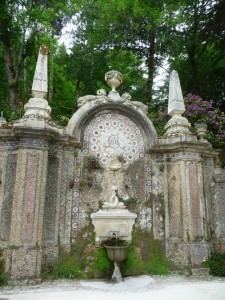 your own story. It’s waiting for you just past the Guardians’ Entrance, perhaps 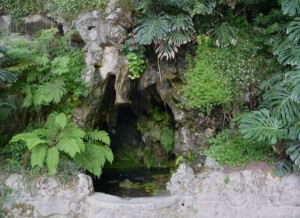 near the Fount of Abundance.