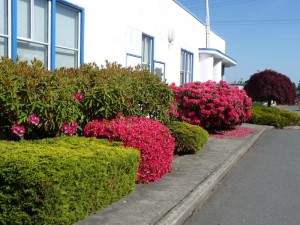 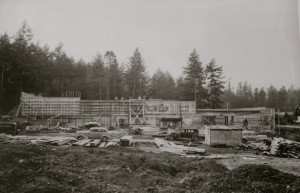 It used to be a factory, purpose built in 1945 to make matches. The location was perfect, out in the back of beyond, halfway between the civilian metropolis and the naval yard. Surrounded by miles of trees, the original forests, uncut except for a swath of rail, a grafted branch from Confederation, running the length of the island.

To make matches, well, that takes more than trees. You’ve got to dip them in the stuff that makes the magic happen. And, just in case too much magic happens the walls have to be thick. Walls almost a foot thick, poured in place, reinforced concrete set on a concrete pad level as a pool table, set into island rock that runs to the core of the earth. Even today, almost 70 years later, it’s a two story bomb shelter. 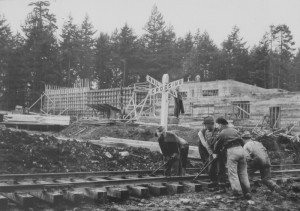 The matches, just like the trees and the train service, no longer roll in or out or past or at all. It’s an industrial park now, warehouses, metal shops and a brewery down the street.

It’s been 40 years since these walls saw men marching in, punching the time clock and starting planers, or chain forging stamps or tool machining equipment. Heard the noise and whine and scream of metal on metal. As a warehouse this space has seen a lot of heavy boots, been filled with purpose, noise, swearing and, for a few years, bread.

It’s quiet now, like the middle of a desert. The last owner decided he could make more money by getting rid of the people and busy-ness. The large empty space is corralled now, swallowed by gyprock and hollow doors: closets, large and small. People pay rent here to house memories.

A place to put their life with mom. Mom’s been put in storage at one or another of God’s waiting rooms. But the kids, lives of their own to hold together, aren’t ready for the final process. The casting of lots for a coat, the dishes. She wanted you to have…remember how she’d always bring us soup in this bowl when we were sick…I’m sure that lamp was from Nanna’s house… But they just want to close that door and put it out of sight for a few more months.

It’s so quiet in that space now. Every morning the lights get turned on, the loading doors unbolted. The lone footsteps of the single employee echo off the concrete walls, a childlike imitation of the roar of machines and the men that used to whistle, to sing here.

And some mornings, as she sits at her desk, her back to the original window onto that factory floor, she catches the faint clack of a time clock

and a whiff of Sweet Caporal cigarette smoke, grease and sweat.